I've been reflecting a lot lately about what this blog was intended to be.  After lots of encouragement from my friends, I started this blog to showcase my personal style.  Unfortunately, it simply never matched in reality what my vision was for it to begin with: to be a fun, casual place to show the ways in which I like to dress.  I've always felt a great deal of pressure to have super high quality photographs and interesting stories to accompany them, but I think it's time for me to step away from that expectation and archetype and move forward in a new direction.

instagram.com/aneyeforfinery is the result of my thoughts about this.  The platform is much more spontaneous and open to the ways in which I want to share my style with the world.  I've moved some past entries from the blog to the insta-account and intend on updating it regularly with my day to day outfits and any other stylish things that I'd like to share.  I encourage you to check it out if you're interested!

By the time I made it to London, I was just starting to get tired and fairly homesick, but there was so much to do!  I arrived early in the evening to the city and settled into my hostel.  One of the women in my room, Sara, and  I decided to go out for Indian food (excellent choice, given the city we were in) and called it an early night.  The next day we hit up Tate Modern, which was a nice palate cleanser after all the Renaissance art I was exposed to in Italy and France.  We parted ways late in the afternoon, and I spent the rest of my daylight hours in Piccadilly Circus (where I also bought some much needed and far too expensive boots...conversion of pounds to dollars and all that...ahem).

That night, I met up with an old graduate school friend, Joanna, for a very, very good cocktail in a very, very hip bar.  It was wonderful to catch up with her and hear about her studies.

It perhaps goes without saying that two days in London is simply not enough, but that is all I had.  It would be like attempting all there is to do in New York City in that span of time, and so it felt silly to try to do all the touristy things.  This was the only city on my trip that I elected to take a bus tour, and I was happy for that choice.  I got to see many of the "must-see" places here in about three hours.  The bus zig-zagged through the city, and I was able to get off at a few spots to take semi-decent photos.


Following my tour of the city, I took the Tube over to Camden for the rest of the afternoon.  Camden is this great Brooklyn-like neighborhood that is probably best known for its outdoor markets.  The vendors sell everything from freshly made donuts and sushi to scarves, jewelry, and vintage clothing.  There was SO much amazing vintage clothing to be found here -- I'm still kicking myself for leaving the most amazing leather jacket there.  That said, I spent hours here following the seemingly never-ending booths along the river and walked away empty-handed.

Sadly, the next morning I had to rush off to catch my flight out of Heathrow after my barely-there visit to the city.  I found the people to be friendly and straightforward, which I greatly appreciated.  It was a great place to spend that last few days of my journey across the Atlantic, and I'm already thinking about a trip to Dublin/London/Amsterdam for the next round of my travels.

On the long flight home, I spent a lot of time remembering the cities I visited.  I read my journal entries and looked over the photos of the incredible art, architecture, and landscape I saw.  I thought about the beautiful and inspiring people I met along the way.  And I felt grateful and joyful and proud.  Too many times in life, I think we make excuses for why we don't deserve to follow our dreams.  We sell ourselves short and forget that we are only here for a short speck of time.  We don't do the things that scare us or the things that are difficult.  This trip showed me that doing the daunting/overwhelming/amazing things was possible, and it probably meant more to me because I didn't travel with anyone else.  For this first trip outside of familiarity, I needed to go it alone.

Already ready for my next journey... 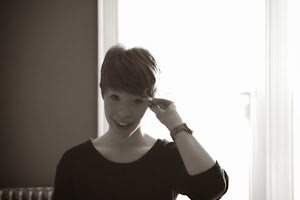